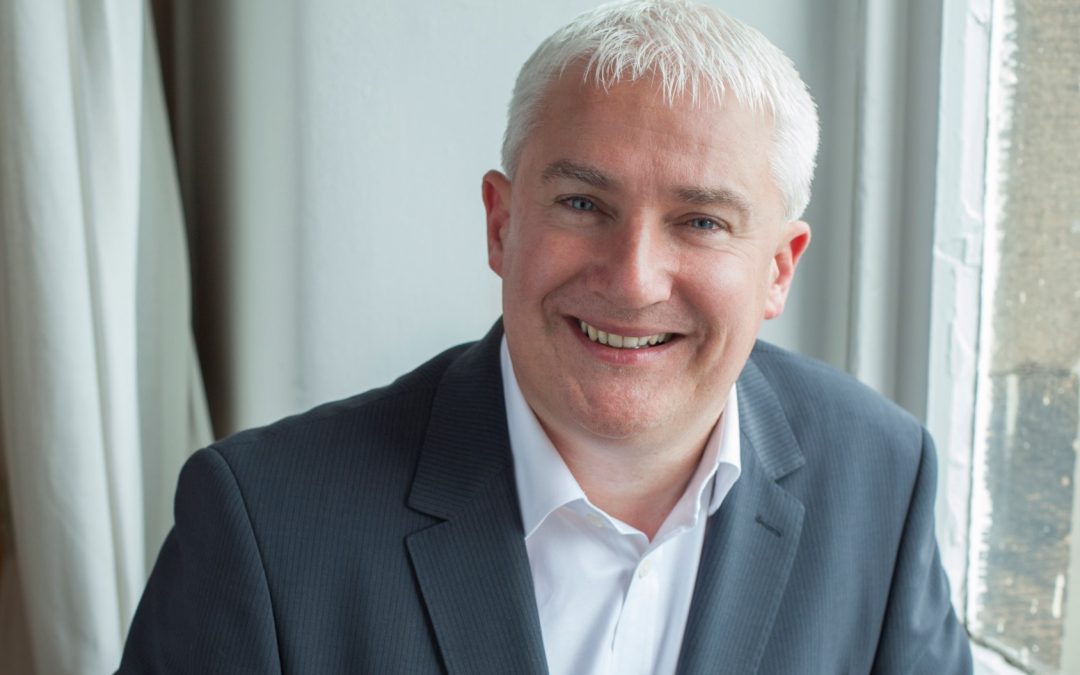 Navy veteran Chris Newlands is on not just his second but third successful career. Here’s how his military values saw him shift from financial planner to award-winning innovator.

It would be an eventful 37 years between Glasgow-based Chris Newlands joining the Royal Navy, aged just 16, and being crowned Innovator of the Year at the first ever Scottish Ex-Forces in Business Awards in 2019. With memories of reading the Commando comic books from an early age, he harboured a desire to join the navy for as long as he can remember – serving Queen and country and travelling the world.

Having started in the navy as a Junior Assistant Stores Accountant, Mr Newlands vividly recalls working on HMS Avenger in the Falkland Islands when a shrapnel shell fired by the ship’s 4.5-inch gun prevented an attack by an airborne Exocet two seconds before impact. He was drafted to RAF Mount Pleasant in 1985, where his presence created the first tri-service base in British military history, before serving on HMS Zulu, the last Royal Navy ship to conduct a naval broadside and with multiple big gun placements.

“I extol the virtues of the services to anyone who will listen.”

Mr Newlands left the Royal Navy in 1988 to pursue a career in financial services, achieving Chartered status in 2012 and working for Prudential, Barclays and Bank of Scotland Wealth. Though the numerical overlaps in his military roles and second career facilitated a smoother transition than others, the lack of a degree did create some challenges. He puts his perseverance down to the values engrained in him in the navy.

“I secured the necessary qualifications whilst working full time and supporting a young family,” he says. “I studied for two hours every day, from 5am to 7am, for seven years, to attain the honours degree in financial planning and Chartered status. I attribute these accomplishments to the discipline and structured training I received during my service career. The skills I learned in the navy have been absolutely pivotal in my career.

“I am able to build teams, act strategically and make strong and lasting relationships. Add structure, discipline and a strength of character forged in the forces, and I believe these are invaluable assets in today’s volatile, uncertain, complex and ambiguous business environment. I extol the virtues of the services to anyone who will listen.”

Mr Newlands embarked on a new career in 2017 as the CEO of Spelfie, the world’s first space selfie app, introducing a new use case for the highest-resolution satellites in orbit around Earth. The app launched following a BBC documentary in November, Saving Our Beautiful Bali, which saw a young environmental campaigner rally an entire village of people to spell out ‘ACT NOW’ on a polluted beach, captured from space by the Spelfie app. Within eight days of launching, the app had received over 50,000 downloads, placing it in the top 10% of all-time app downloads.

Each day 93 million selfies appear on social networks – a phenomenon Mr Newlands wants to capitalise on from an entirely different perspective. Spelfie is akin to a 600km long selfie stick, allowing people to capture their experiences at major live events – from space – creating unique, socially shareable content. The app aims to disrupt digital marketing as a highly targeted experiential tool to increase engagement with audiences.

“We have developed a COVID-19 strategy for closed-door or socially distanced sports events, which allows fans to participate from the safety of their homes, giving them a time-stamped souvenir of an historic season,” says Mr Newlands. “From a positive perspective, this creates the opportunity for millions of fans to interact, as they are no longer limited by the physical constraints of venues.

“Organic and experiential content shared by users is 12 to 18 times more effective than corporate social media posts or paid advertising, providing more relatable opportunities for brand awareness, sales activation and data insights. The app is free for users, while brands pay for the satellite tasking as they’re keen to enhance the experience of the attendees at their sponsored events. Everyone wins.”

Spelfie’s sister app, Tripsology, will re-launch in 2021 due the unprecedented impact of COVID-19 on international travel, using air quality data sourced from both space and on Earth to create a consumer pre-trip destination research tool, offering red, amber and green flags. “With more than 20,000 people dying from air pollution every day, more than smoking, Tripsology arms travellers with information about specific destinations so they can make better-informed decisions for their health,” Mr Newlands adds. “My team, board and investors want to make a difference whilst making money – ethics and values which I believe reflect my time in the armed forces.”

Out of this world

In December, Mr Newland’s success with Spelfie and Tripsology saw him claim the Innovator of the Year award at the first ever Scottish edition of the Ex-Forces in Business Awards, the world’s largest celebration of veterans in second careers. The judges praised his ambition and courage to launch the apps and the disruptive spirit he has displayed through the enterprises, creating interesting and unique concepts and then developing viable commercial models to turn them into successful businesses.

The prestigious awards programme is dedicated to increasing visibility of business role models for veterans. While many service leavers go onto highly successful second careers, visibility of such role models has historically been lacking. Last year, the awards showcased the achievements of nearly 300 veterans and reservists at events in London and Glasgow attended by more than 1,400 business leaders and over 450 employers. 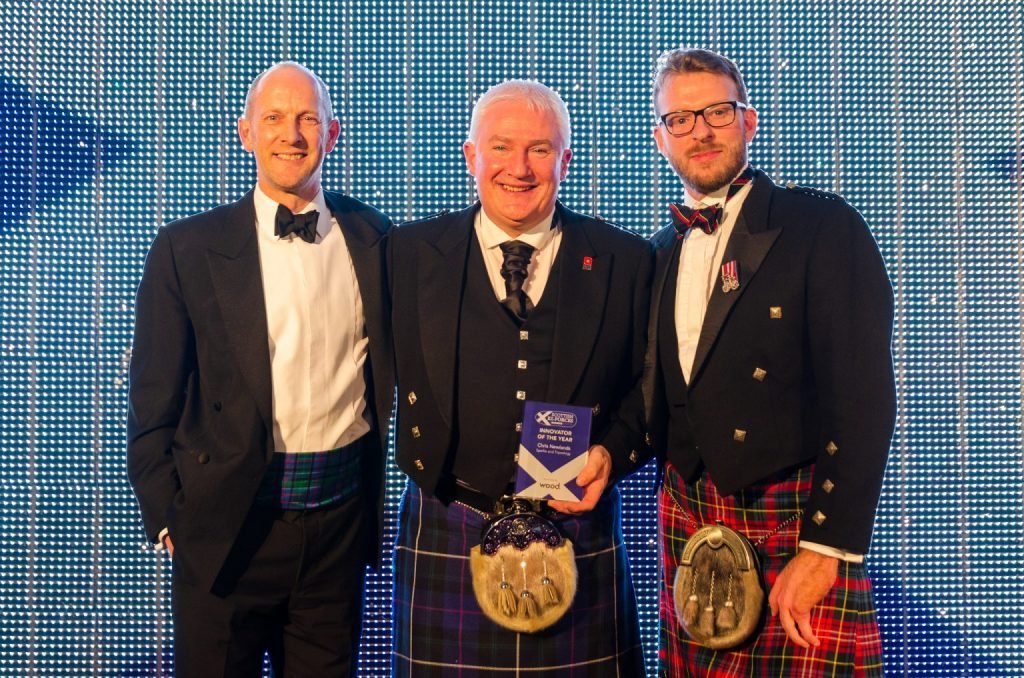 Chris Newlands picks up the Innovator of the Year award at the Scottish Ex-Forces in Business Awards 2019.

“I was and remain incredibly proud to be recognised at the Ex-Forces in Business Awards, especially when you consider the quality of the competition,” says Mr Newlands. “It was a fantastic evening with true heroes and has proven to be incredibly helpful on several levels as there is an inherent respect for people who have served.

“The constant theme of the night was that our servicemen and women sometimes need a bit of support from employers to transition from a life of structure and discipline, with all of the advantages that brings, into civvy street – but those employers will find a world-class work ethic, a can-do attitude and strong leadership skills in their DNA.

“Therefore, assuming the candidate meets your role’s requirements, please consider the key attributes of ex-forces personnel, who love teamwork and problem solving and have a strong strategic mindset. A career in the armed forces doesn’t define or limit you – it offers you a fantastic foundation for a lifetime of opportunities, yet to be defined.”

“I was and remain incredibly proud to be recognised at the Ex-Forces in Business Awards, especially when you consider the quality of the competition.”

Having transitioned into two successful careers since leaving the armed forces, Mr Newlands’ advice to recent service leavers and servicemen and women looking to transition in the near future is to take time to research and fully understand which industries or professions excite them and would value their skills and experience.

“Use LinkedIn to find local business people who operate in those sectors, read articles they have written or shared to understand their view of the world and what’s currently topical. Then send them a personalised invitation to connect, complimenting them on their article. Build a relationship and tell them of your desires to enter their world.”